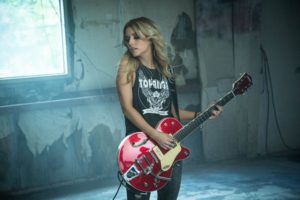 Nashville, TN (July 7, 2017) – On the heels of her debut EP Worth The Wait (3/24) surging back to the Top of the iTunes Country Chart late last month, Lindsay Ell will world premiere her eagerly-awaited music video for her romantically-charged current single “Waiting On You” on CMT Hot 20 Countdown this Saturday, July 8 at 9am ET / 8am CT with an encore airing on Sunday, July 9 at 9am ET / 8am CT. Fans can keep up with the conversation on Twitter using hashtag #CMThot20.

Last month, Ell made her late-night debut on ABC’s Jimmy Kimmel Live! performing “Waiting On You” and proving why PerezHilton.com lauds she has “all the makings for to be a superstar.” Watch the performance HERE. The song serves at the lead single to Ell’s forthcoming debut album The Project, due out in August. The Stoney Creek Records artist is currently supporting superstar Brad Paisley on his Weekend Warrior World Tour throughout the U.S. and Canada.


Named one of The Huffington Post’s “Top Country Artists to Watch,” Lindsay Ell is a triple threat:  accomplished musician, unique vocalist and songwriter. The young Calgary native learned to play guitar while traveling with her father to country-bluegrass camps as a young girl. Ell honed her craft as a musical stylist and songwriter after being discovered by BTO and The Guess Who’s Randy Bachman (“American Woman” / “Taking Care of Business”) who discovered her at the age of 13.  The multi-instrumentalist was soon touring alongside the likes of Luke Bryan, Buddy Guy, The Band Perry and Keith Urban as well as wowing audiences as Carrie Underwood’s guitar player live on the 50th Annual CMA Awards and holding her own alongside icon Melissa Etheridge on Skyville Live.

A 2016 CMT Music Award and Canadian Country Music Award nominee, Ell exhilarated audiences from coast-to-coast as part of the 2016 CMT Next Women of Country Tour and is featured on Brad Paisley’s 2017 WEEKEND WARRIOR WORLD TOUR. Ell’s debut album, The Project is due out in August 2017 via Stoney Creek Records. For more information visit: http://www.LindsayEll.com.